In my earlier post also, I have discussed the importance of Ganesha Chaturthi and elaborated on some of the rituals to be observed on this day. In this post, I am giving you some more information on the points to be kept in mind while choosing Ganesha Idol and how you could appropriately welcome Lord Ganesha in your home to bless you. 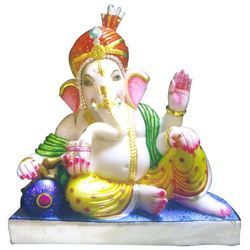 It would be preferable to bring Lord Ganesha one day previous to the day of Ganesha Chaturthi. Before entering your home with the Murti/idol, ask a family member to bring a bowl of rice. Shower the rice (Kacha rice) on Him and then step inside the home with the slogan- Ganpati Bappa Moriya. You can welcome him by lighting a Deepak of pure ghee. The worship of lord should be done with Aggarbatti (incense sticks), Dhoop, Aarti Thali, One Supari and One Paan Leaf. Before installing Ganesha Idol keep a red colour cloth at the place where idol would be kept.
The following points should be kept in mind while choosing Ganesha Idol and while worshipping Him during the festival:
1.         Make sure that the area where the idol is installed in cleaned everyday & rubbish does not collect there.
2.         Aarti must be done daily and a lamp must be lit both in the morning and evening.
3.         According to religious scriptures, Tulsa leaves must not be offered to Lord Ganesha.
4.         The idol must be installed following Vaastu, in the ‘Ishan’(North East) triangle area of the room. It would be better if the idol is facing west because in that case you will be worshipping Him looking at East.
5.         ‘Durva’ grass, Rose flowers and Modak should be offered to Lord Ganesha.
6.          Avoid wearing slippers. Leather belts or keeping leather wallets near the installation area.
7.         After installation try not to move the idol or change it’s direction.
8.         Sitting near the installed idol and reading a religious text will give you good results.
9.         Please note that selected idol should be a seated one, not standing. If a guest pays a visit, we offer him a seat and not keep him standing. During Ganesh Chaturthi, we invoke God Ganapati, that is invite Him. One should offer Him a seat and proper hospitality. Harboring the spiritual emotion that God Ganapati has actually come to visit us. Besides due to the entire weight of the idol resting on the feet, the idol may even break if it is kept in the standing position for ten consecutive days.
10.      Idol should be placed on a heap/mount of rice and after immersing the Idol, the same rice to be mixed with the house stock of rice. This would shower the blessings of Lord Ganesha for the whole year on you.
11.       You can prepare the pooja thali with the following items:
(If you are not able to have all the times, there is no need to worry because what is important is your emotions and devotion towards Lord Ganesha)

Now Ganesh’s soul is invoked in the idol and you can start performing the customary puja rituals/bhajans.

After doing the Aarti, stand up straight. Fold your hands and do namashkar. Turn clock wise three times. Do namaskar to the benevolent Lord Ganesha. Take prasad and distribute it to everyone present. Take blessings from Lord Ganesha for a happy and prosperous life.

Posted by LAL KITAB ASTRO CENTRE at 00:35 No comments:

CELEBRATE GANESHA CHATURTHI AND GET BLESSINGS OF LORD GANESHA

It is believed that one should not see the moon on Ganesha Chaturthi. Sighting the moon on Ganesh Chaturthi creates Mithya Dosham which means false accusation of stealing something. Depending on start and end time of Chaturthi Tithi, sighting of the moon might be prohibited for two consecutive days. According to DrikPanchang.com rules, Moon should not be sighted while Chaturthi Tithi is prevailing. Further, Moon risen during Chaturthi should not be sighted even if Chaturthi Tithi gets over before moonset.
Ganesha Chaturthi in year 2012 will be celebrated on 19th September 2012. The madhyahana puja time for this purpose is of 2 hours 24 mins duration (11.07 a.m. to 1:32 p.m.)
The Ganeshotsav, the festivity of Ganesh Chaturthi, ends after 10 days on Anant Chaturdashi which is also known as Ganesh Visarjan day. On Anant Chaturdashi, devotees immerse idol of Lord Ganesh in water body after a gala street procession. Anant Chaturthi (or Anant Chaturdashi) is the last day of the “Ganesha festival” celebrated in Maharashtra, Gujarat, Karnataka and Andhra Pradesh. It is the tenth day after Ganesh Chaturthi which falls on the 14th day of the bright Bhadrapada (the sixth month of Hindu calendar). The day follows the immersion of the idols of the beloved Lord but to be welcomed the next year with equal fervor. Some people observe a vow in honour of Lord Vishnu, which if kept for 14 years is supposed to bring wealth. Taking the rising tithi in account, on this year, Anant Chaturdashi will be celebrated on 28th September 2012. 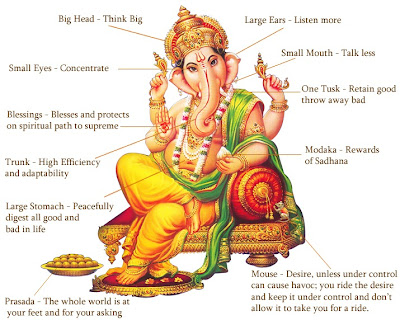 How to conduct Puja on Ganesha Chaturthi
On this auspicious day a beautiful idol of Lord Ganesh should be made of clay or some metal like silver or it could be brought from the market. The trunk should be curved in the left. Now this idol should be installed on a high pedestal with its face facing east/west or north. Having anointed the idol with sandalwood or saffron paste and invoking the Lord for the 'Pran-pratishtha' (consecration), offerings with 21 objects should be kept ready, which should include Patri (leaves), Kewra (pamdames), Shamee (a kind of tree leaves), white flowers (lily), Durba (grass twigs), red sandalwood, sindoor (red vermilion powder), panchamrita (a potion made from mixing milk, curd, honey, sugar and water) and the leaves of Tulsi or basil etc. One must remember that basil leaves or Tulsidal are permitted in the Lord's worship only on this day, and not on other days. Now, after seating yourself on the Kushasan (a small mattress made by the weed called Kusha), you should invoke the Lord and complete the worship as mentioned earlier. After this, you can perform the Mahabhishek (Grand Anointing Ceremony) by Panchamrita etc., and sing the 'Aarti' of the Lord with a lighted lamp waving in your hand before the Lord's idol. Then the oblation of Durba, flowers etc. should be offered to the Lord. After this religiously move around the Lord seven times in anti-clockwise direction and lie with hand and feet fully stretched on the ground with face facing the ground to salute the Lord. This sort of special salutation is called Sashtang Namaskar'. Then 21 Laddoos should be offered as the Lord's symbolic food or the 'Prasadam' which should be distributed to as many devotees as possible. It is said in scriptures that 'Prasadam' should be distributed to the greatest number of persons possible with each getting as little of the share as to have it totally absorbed or digested by the eater's body and there should not be any refuse left out of it after digestion.
Having made the offering, the following 'Mantra' (incantation) should be recited:

[I bow to the head of Ganas, the Destroyer of all sin, the son of Uma (parvati), who has One Tusk and Elephant-Face and the mouse as His vehicle. Supreme Leader, who grants the boon of son and every desire, whose elder brother is Kumar (Kartikeya)- this way I endeavor to worship you)
"Aum gam ganapataye namah"